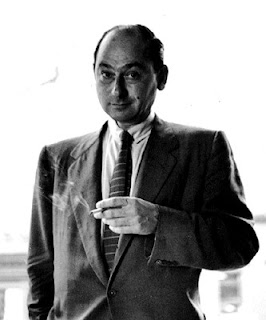 George Nelson (1908-1986)
He was one of the most important icons in Industrial Design in the 20th century. He was not only focus on the actual industrial design part but he was very involved in the part when this profession was starting to emerge and to be defined. He wrote some articles about this subject (among many other subjects) that tried to defined the profession in a critic way. He was very involved in everything that concerned the house and our environment as the man-created world, in where everything that surrounded us was made out of a conscious decision. In order for us to have a better understanding of his design methodology, I will discuss three of his projects: The storage wall, The Omni System/Comprehensive Storage System (CSS), and the Sling Sofa. 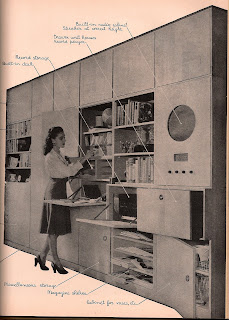 The Storage wall consisted in wall that, instead of being just a wall, had all this storage space adequate for the necessities of the consumerist society. There was the necessity of additional storage because basements and attics where disappearing: the new architecture was drawn to low pitch roof and there where smaller modern heating systems that didn't need as much space as they used to.
The design was inspired in app
lied storage solutions from drugstores, hardware stores, grocery store where most of the items fit comfortably on shelves not more that ten inches wide.
It wasn't only a solution for closet space, but organized storage with tube lights, curved corners (for easy cleaning), separated doors, variety in defined spaces – a place for everything.

I chose this project because it’s a definite point in how he became an industrial designer. In some of the books I read, he attributed his career or his path to chance: the way he became an architect, then a writer for Pencil Points, which led him to the publication of the book Tomorrow’s House and to the publication of the “Storage Wall” in Architectural Forum and in Life Magazines. This last publication got him a job in Herman Miller as the design director position. In Herman Miller he not only contributed as a design directo
r with the furniture and product design, but he also implemented the corporate image design, the catalog design and the Herman Miller Philosophy. 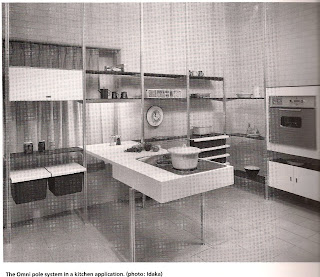 One interesting thing about George Nelson was that DePree was right, he didn’t limit his designs to the traditional materials, he liked to experiment of what would happened if you combined or use substitute materials for different designs. That’s why William E. Dunlap from Aluminum Extrusions Inc. wrote to George Nelson and Charles Eames to ask for their help to look for a new product for the subsidiary Company Aluminum Manufacturing Co. to diversify its output. 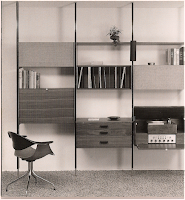 George Nelson designed for him a product that was a square-section extruded aluminum pole that could be erected between a floor and a ceiling and held there by springs with no attachment to a wall. The poles where designed to hold any number of components between them – shelves, storage cabinets, files, and could be use in any part of the house, bedrooms, children’s rooms, offices or exhibitions.

“My tought, was that we were going to generate a kind of aluminum lumber, and since, everybody needs storage in their houses, they could just go to the lumber yard and get these elegant poles and shelves and brackets” 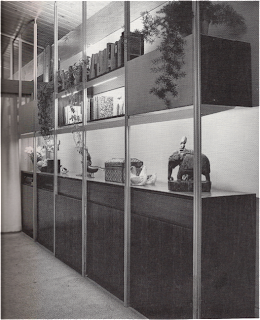 There was a mock up of the Omni system showing seven or eight possible configurations built in the Charlotte factory and Nelson took Hugh and Max DePree to a presentation. Dunlap was hopping that Herman Miller would take over the marketing of this system but they didn’t. So he ended up taking the marketing himself (Which George Nelson design the all the graphics for the system, such as letterheads, bills, tags, shipping labels, and even graphics for trucks) and Omni went to sale in Marshall field’s another retail store. But after the DePree brothers saw the apparent success they became interested after all, reminding to George Nelson of his exclusive contract with them, Dunlap suggested that Nelson designed another system for Herman Miller saying that if people saw more systems like his, they would become more familiar and therefore more marketable. The result was the Herman Miller Comprehensive Storage System, which the difference was that the CSS was based on a tube quite different section, and used different connectors; it wasn’t very stable and it took more skills to install that they wanted to. But this design led unexpectedly to advances in office furniture. 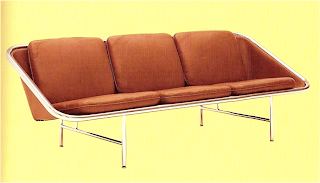 This idea of usign different materials for product design was also used for the Bubble lamp and for the Sling Sofa. The Sling sofa was the predecessor of the Marshmallow sofa (1956), the problem with the marshmallow sofa was that it was ahead of its time technologically and aesthetically, it was designed over a weekend as a solving problem exercise when a company from Long Island offered this self-skinned injected plastic cushions that needed to be 12in max, but at the end the company couldn’t meet with these specifications so Herman Miller had to manufacture them by hand which lost the hole point of its design, so they stop production of them. For the Sling sofa on the other hand, the technology to make it was already in use. 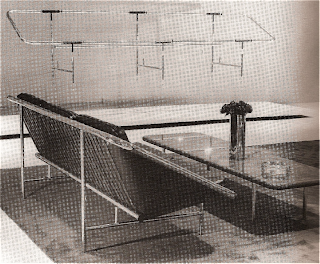 The story tells that George Nelson and his wife, Jacqueline, were in the French country side driving in a Citroen “Deux Chevaux” , when George Nelson asked Jaqueline to get out the car, hot and dismayed, she retreated to the shade of a lone tree and watched while he removed the car seat and examined the rubber support that cradled it. Haven’t you noticed? he asked, How comfortable this seat is? And after almost three years of development it leaded to the Sling sofa.

In summary, George Nelson’s work had great influence in the design industry. Not only for his own designs, but also his contribution to define the profession. All the turning points he had during his career and all the information that he gathered during his trips help him to have a deeper understanding for the profession. He got his first break because of the way he wrote what he saw, he had this ability to make his statement clever and objective. He was a very good writer that influenced a lot of people with his articles.

Thanks for a very informative article and the links were also great!

I'd appreciate if you can give me some feedback on our site: www.regencyshop.com

I realize that you are home decor-modern design connoisseur :) I'd like to hear your opinion/feedback on our products. Also, it'd be swell if you can place our marshmallow sofa on your blog.