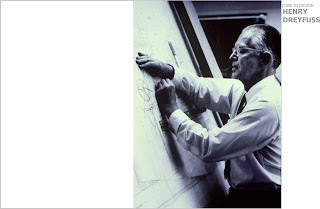 Henry Dreyfuss was born to immigrant parents in Brooklyn, New York in 1904. He studied at the Ethical Culture School in New York before becoming apprenticed to the industrial designer and legendary Broadway stage designer Norman Bel Geddes in 1923. While working in Geddes’ office, Dreyfuss mainly concentrated on theatrical work and designed costumes, sets, and lighting for the Strand Theater, New York, and for the R.K.O (Radio-Keith-Orpheum) chain of theaters. In retrospect, he viewed his experience in theater as training for his future chosen profession in industrial design. He compared his job in theater, of creating a set that expressed the mood and the action of the show, to industrial design, as both involved carrying his ideas through by dealing with people diplomatically. In design, the producer and director were like the president of a client firm, while the carpenters, electricians, and musicians could have been the firm’s engineers. He also had to meet a definite schedule, and the final determining factor of success was audience approval (applause after the show!) or the customer’s reaction at the sales counter.
“Form follows function” had been the Industrial designers golden rule and Henry Dreyfuss believed in it. Ergonomics and safety took precedence over styling and as a result, many of his products such as the Round thermostat, are the sort that we take for granted.
He opened his own design office, Henry Dreyfuss Associates in 1929, for theatrical and industrial design activities. The theater was to pay the bills while he concentrated on developing his industrial design work. This practice holds true even today where a lot of fledgling design firms fall back on simple jobs to sustain themselves while pursuing their calling. 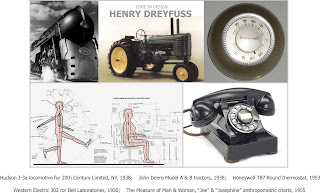 Work Methodology
Henry Dreyfuss had a rigorous working methodology. He understood that the designer played a dual role. He was a member of the client’s family as well as an outsider intervening but retaining his authority and individuality. The industrial designer’s most valuable contributions to his client’s products was his ability to visualize. He could sit at a table listening to ideas thrown off by engineers, production executives etc. and incorporate them into a sketch that crystallized their ideas, good or bad. The designer’s outside point of view or perspective was the key contribution. Dreyfuss was a Generalist in the most positive sense of the word.
Following the Depression years, all manufactured products came out looking similar. Companies were under-cutting each other until manufacturers came to the realization that the answer to the problem was to “make their product work better, more convenient to the consumer and better looking”. Industrial designers were called in to do just that against the general view of their role as decorators of the finished product. The simplicity of the Round thermostat was a brilliant solution to a problem. Most thermostats until then were rectangular, posing an irritating challenge of aligning it in an installation. Correcting crooked installations were time consuming and the Round eliminated that inconvenient alignment component altogether.
It was interesting to note that he viewed the service of transporting people and the marketing of a product with the same eye. The difference, he felt, was just an increase in scale.
Dreyfuss’ methodology was strongly process driven, iterative, and subversive, in a search to tackle the real problem. He categorized them as Analysis, Sketching, Modeling, Presentation & Critique. His basic characteristic of work was “simplicity”, resisting the temptation of superficially decorating objects. He focused on making meaningful aesthetic choices and made complicated things seem simple.
He was very realistic about the system within which he worked. “It was pointless to produce a product so expensive that no one can afford or so under-priced that it did not permit a reasonable profit to the manufacturers.”
The diagram above shows his desire to stay in control of the design process.
He would routinely decline work where he did not have ultimate control of the design process. If he could not consult with engineers, he was not interested in the project. This was the reason, he rejected the job offer from Macy & Co. upon his return from Europe in 1928, because he was to merely provide suggestions to manufacturers without having a say in new designs. What I found intriguing was his ability to involve all kinds of professionals in the design process. He would often pull in people who had no experience in an area that he was designing for, to bring in fresh ideas and new inspirations. In his eye’s the designer was a catalytic agent and should be able to “switch gears quickly”.
Henry Dreyfuss: “We bear in mind that the object being worked on is going to be ridden in, sat upon, looked at, talked into, activated, operated or in some other way used by people. When the point of contact between the product and the people becomes a point of friction, then the Industrial Designer has failed. On the other hand, if people are made safer, more efficient, more comfortable – or just plain happier – by contact with the product, then the designer has succeeded.”
Dreyfuss was influenced by the Art Deco movement, a style that was seen as elegant, glamorous, functional and modern. He belonged to the Streamline design era although he was not a stylist like his contemporary Raymond Loewy, who he regarded with some prejudice, on his use of streamlining. Simplicity was his strength. Dreyfuss’ locomotive design, Mercury, for 20th Century Limited was a classic example of Streamlining as the form that follows the rules of aerodynamics. 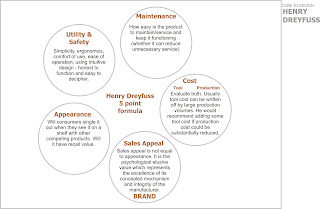 Five Point Formula
His mantra was – safety and convenience of use, ease of maintenance, cost , appeal, and appearance.
This prioritization made his design exceptional as these were five points centered on human and not abstract values.
Henry Dreyfuss introduced Human Engineering in the form of Joe and Josephine, his common denominators for all dimensions. His interest in anthropometry could be traced back to his admiration for Leonardo da Vinci and his Vitruvian man. Leonardo da Vinci made the drawing in 1487 and it depicts the correlations of ideal human proportions using geometry described by Vitruvius. He made it as a study of proportions of the human body. Everything designed today is used by people and they come in many sizes and have varying physical attributes. Joe and Josephine were a part of his design staff representing the numerous consumers for whom they were designing. The designer’s job was to make Joe and Josephine compatible with their environment and this new process was called Human Engineering. The design group also created a miniature encyclopedia of human factor data for industrial designers. 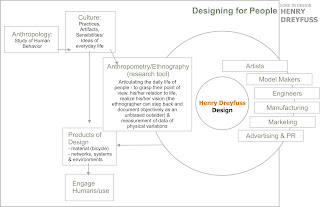 Henry Dreyfuss’s design process is still the current practice although the dynamics of the industry has changed. In the global market where manufacturing is usually outsourced, it is critical for the designer to have a good control of the design through the development process. Iterations between the client and the manufacturers allows for the accurate translation of the intended design. 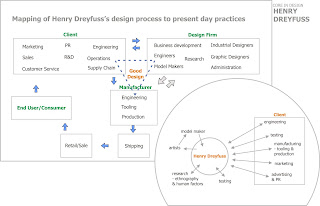 Conclusion
To Henry Dreyfuss, Leonardo da Vinci was the first Industrial designer. He had the imagination to put his drawings of his flying machine on paper in 1517. They became a reality 500 years later. Leonardo was as modern and imaginative as someone in today’s times. By his example, to look ahead, we need to look back and discover how many of the ancient dreams have realized, to hope how successful and accurate the innovators of today would be 500 years hence.
Henry Dreyfuss’s ethnography and anthropometric data as a research tool laid the basis for designing for people. Now, new technology has taken this tool many steps forward and uses 3D scanning to compute exact body proportions ( Sizing China: 3 –D scanning and recording of head shapes in Asia for helmets, eyewear etc. for the Asian market). This new digital database is going to be the first of its kind to enable designers to enter markets that were beyond their reach because of insufficient data. China and India comprises one third of the world consumer base. With globalization and the opening of foreign economies, following the fall of communism, the whole world has come closer and products have a wider reach. The new global culture creates a global trend and designers and manufacturers need to pay heed to the differences in physical attributes, when designing for a trans cultural audience.

Yet, data without imagination is but data, and industrial designers play a critical role in its translation.

Very clear article, especially schemes. I'll make a speech about Dreyfuss soon, and I think that i'll put your blog in my list of sources.

I used this website http://iPhoneUnlockWizard.com and i managed to unlock and jailbreak my iPhone and iPad quite fast! I got some other free stuff? you can try it too if you want!

Where would you find one of his 60s era Air-Clip design for sale???

If you are interested in the "Air-Clip" I have one for sale to the highest bidder
Chrispruitt83@gmail.com

I am very happy this day because a miracle just happened to me, I did not expect to be with my lover anymore, but thanks to DR DAWN, a powerful magician who made it possible. I was searching online on April 15, 2022 to see how I can restore my love life and I came across many testimonials about DR DAWN. I approach her and I am grateful for her help now my boyfriend is back with me. Thank you DR DAWN I will continue to testify for you. you can trust DR DAWN to solve your problems %100 honestly contact email, dawnacuna314@gmail.com
Whatsapp:+2349046229159