Theo van Doesburg was born in on August 30, 1883 as Christiaan Emil Marie Kupper. He was a Dutch painter, writer, poet and architect. Van Doesburg is famous for founding the De Stijl movement and design achievements such as a spread from De Stijl, volume 4, number 11, the font Architype van Doesburg, and the Dadaist book cover called Kleine Dada Soire’e. 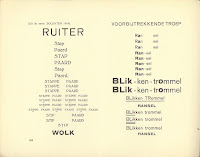 In 1915, van Doesburg encountered the works of Piet Mondrian. He enjoyed Mondrian’s complete abstraction of reality, which was also present in his own paintings. Van Doesburg contacted Mondrian and in 1917 they co-founded the De Stijl journal. This journal was made up of illustrations and articles about the ideals of artists of that time; it was an outlet for all people that were concerned with a new art. In May 1920, van Doesburg started publishing experimental poems under the name Bonset. A spread from De Stijl, volume 4, number 11 is one of van Doesburg’s great works because it is a strong example of the stylistic characteristics sought after in the De Stijl movement. It is a spread of van Doesburgs poems laid out in an interesting and asymmetric way. It uses the principles of orthogonals and experiments with variations in letter sizes. This layout is important because it exhibits how De Stijl principles can be translated from painting into typography.

The journal was pivotal to the De Stijl movement. The primary principle of this movement was to create ultimate simplicity and abstraction. The stylistic characteristics represented in the De Stijl journal were the “stripping down of the traditional forms of architecture, furniture, painting or sculpture into simple ‘basic’ geometric components,” a “studied and sometimes extreme asymmetry of composition or design,” only using ‘orthogonals’ (horizontal and vertical lines) and the exclusive use of red, yellow, blue, white, grey and black (Overy 11). The journal itself did not use much color, if any, but it did follow the other typographic principles.

“The Guitar Player” by Picasso 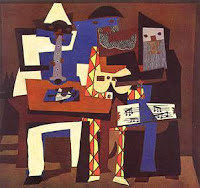 Van Doesburg was influenced by Cubism paintings and M. H. J Schoenmaekers’ neoplatonic philosophy that focuses on ideal geometric forms. A social influence of his work and ideas was the First World War. Since the were neutral in the war, Dutch artists couldn’t leave the country after 1914. This isolated van Doesburg from the rest of the art world and therefore inspired him to start an art movement that was inclusive to all and eliminated isolation. The De Stijl environment was the “expression of a goal to work through the arts to achieve an ideal future when all the walls that separate men would be broken down and when society would be truly integrated and capable of constructing a utopian urban environment of abstract forms” (Overy).

The purpose of the De Stijl journal was for artists and architects to be connected stylistically and ideologically, and to promote the De Stijl movement. The De Stijl movement was a way to move on from the time of the war and create a new art. Theo van Doesburg desired to make a style-less art. The artists from the De Stijl movement, especially its founders van Doesburg, Mondrian, Bar Van der Leck, Anthony Kok, Vilmos Huszar, and J.J.P. Oud, were concerned with new ways of conceptualizing and producing art and design. They also cared about the way it interacted with society. Some of the ideas of De Stijl were the “insistence on the social role of art, design and architecture,” a “belief in a balance between the universal and collective and the specific and individual,” a “utopian faith in the transforming qualities of mechanization and new technology” and a “conviction that art and design have the power to change the future (and also the lives and life-styles of individuals)” (Overy 12). The work towards a style-less art influenced the Bauhaus movement and the international style of architecture. 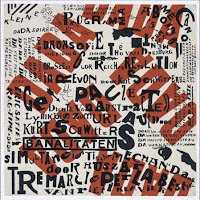 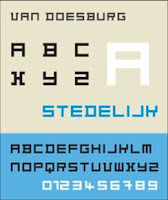 Another graphic design achievement of van Doesburg was Architype Van Doesburg, a font that was based on his new alphabet designed in 1919. It was later rendered digitally by Freda Sack and David Quay of The Foundry. Architype Van Doesburg is a geometric sans-serif typeface. Perpendicular strokes make up the face and each character is based on a square divided into 25 smaller squares. Van Doesburg’s alphabet was “in limited quantity, made up of letterpress ruling pieces, and not as strictly formed as his more finished 1919 version” (Wikipedia). The purpose of the typeface is to develop form from the function of the text. The geometric text follows the ideas of De Stijl, staying with the use of orthogonals. The font allows for another way to incorporate this new style of De Stijl into typography and graphic design. 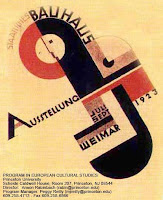 Theo van Doesburg started working with Dadaists. One of his popular pieces from the Dadaist period is Kleine Dada Soire’e, a Dadaist book cover. Van Doesburg built upon the De Stijl styles and introduced the diagonal in his work. This caused great conflict with partner Mondrian, and even led to the temporary separation of the two because Mondrian believed in strictly using orthogonals and no diagonals.

Van Doesburg’s dream of starting a movement of new art did lead to some great works and even contributed to the huge Bauhaus movement, but I don’t think that it ever reached its goal to unify the world through art. De Stijl was based off the dream for a style-less style. This created some interesting pieces, but in the end it is not what everyone wants. Style is too implemented into design and art to be taken away for good. The idea of simplicity was very prevalent during the De Stijl movement, and is an important option for design today. Some times less is more, but not in every case, which I feel is what van Doesburg wanted.

After thinking about what was important to van Doesburg, I decided to redo the Mangia’s Pizza menu as a puzzle. The basic philosophy of van Doesburg was unity. I thought that puzzle pieces coming together and unifying to form the cover of the menu would be a good way to honor van Doesburg. The inside of the menu listed all the items in a style reminiscent of the De Stijl journal. Lists and orthogonal lines organize the page, with a couple of diagonals used to represent when van Doesburg strayed away from partner Mondrian.

thank you. the post is really useful for me.

Nice! I really enjoyed reading your post. Thanks for sharing and keep up the good work.

I've just installed iStripper, and now I can watch the sexiest virtual strippers on my taskbar.